[Author’s note: this piece is best read while listening to this.]

Nobody said it could (/should) be done.

When I think of all the sports movies that make me cry, they all share the common trait of telling a story about someone overcoming seemingly insurmountable odds with nothing but grit and heart. I believe this story will now exist among those stories.

I’d been threatening to build a Gritty costume for some time. It is the kind of pointless tom-fuckery that I aspire to. The major stumbling block each time I thought about it seriously was the cost. I was looking at upwards of thirty dollars for even just orange fur costs alone. With the odds stacked against me, I looked for inspiration in one of my all-time heroes/dream boyfriends – Billy Beane. I was not flush with cash like the Yankees aka professional mascot makers. I had a fixed budget, so in order to achieve my dreams. I’d have to look at things different, work within my budget and find the pieces I need to achieve something.

All I had was twenty bucks, a lot of heart, and a deadline for another project I really felt like procrastinating on.

I purchased my supplies in Chinatown. The bill came to 19.88 was I interpreted at a sign from the sports Gods that I was on the right track – as Gretzky and Moose raised up the cup in 1988, so too would I raise the head of a Gritty like monster above me.  My original plan was to build off that scary mask I bought, but once I got home I found a pull box that I once wore to a funeral. I looked very stylish and it was honestly very inappropriate. So it seemed for the best to never do that again and instead use the hat in my quest for greatness. I returned the mask and instead purchased an additional wiggly worm, which has the added bonus of making the man who ran the store pity me.

Truly if there was ever an underdog, it was me.

A key problem to overcome in this process was my lack of traditional art “skills”. This combined with my general laziness made the task ahead perilous. The strategy I went with was twisting pipe-cleaners into a sort of cage. This method proved easy enough for someone as unskilled and dedicated to watching tv while I work as I was. Once the cage was completed I began the task of just tying a bunch of piece of yarn and fraying them. This task was incredibly boring, and so was done while watching the show “Santa Clarita Diet”. The show is by no means perfect, but there’s a lot of goods stuff there. I particularly love how the relationship between Drew Barrymore and Timothy Olyphant is played like any couple in a commercial. Olyphant reacts to Barrymore’s want to eat people like a husband who’s just discovered his wife still hasn’t switched to Geico. The show is a perfect amount of engaging to watch as you lie hundreds of pieces of yarn to the pipe-cleaner skull of a monster. Once tied on, I fray the pieces of yarn, which takes goddamn years.

The wiggly worms not only served as a piece of the mouth I built but the packing they came in served as a major piece of the eyes. One man’s trash is another man’s eyes of a Gritty. For the jersey, I added pieces of tape to a large orange shirt and called it a day. Honestly: that yarn thing took forever and I have an actual job with a deadline, like this week (Jesus fuck; I am not going to make that). I hot-glued it all together and revelled in my twenty dollar triumph. I plan to top it off with my bike helmet. If I get in an accident on my bike, I could die, but whatever.

Take a moment now and prepare yourself for the intense feels of seeing the power of the human spirit: 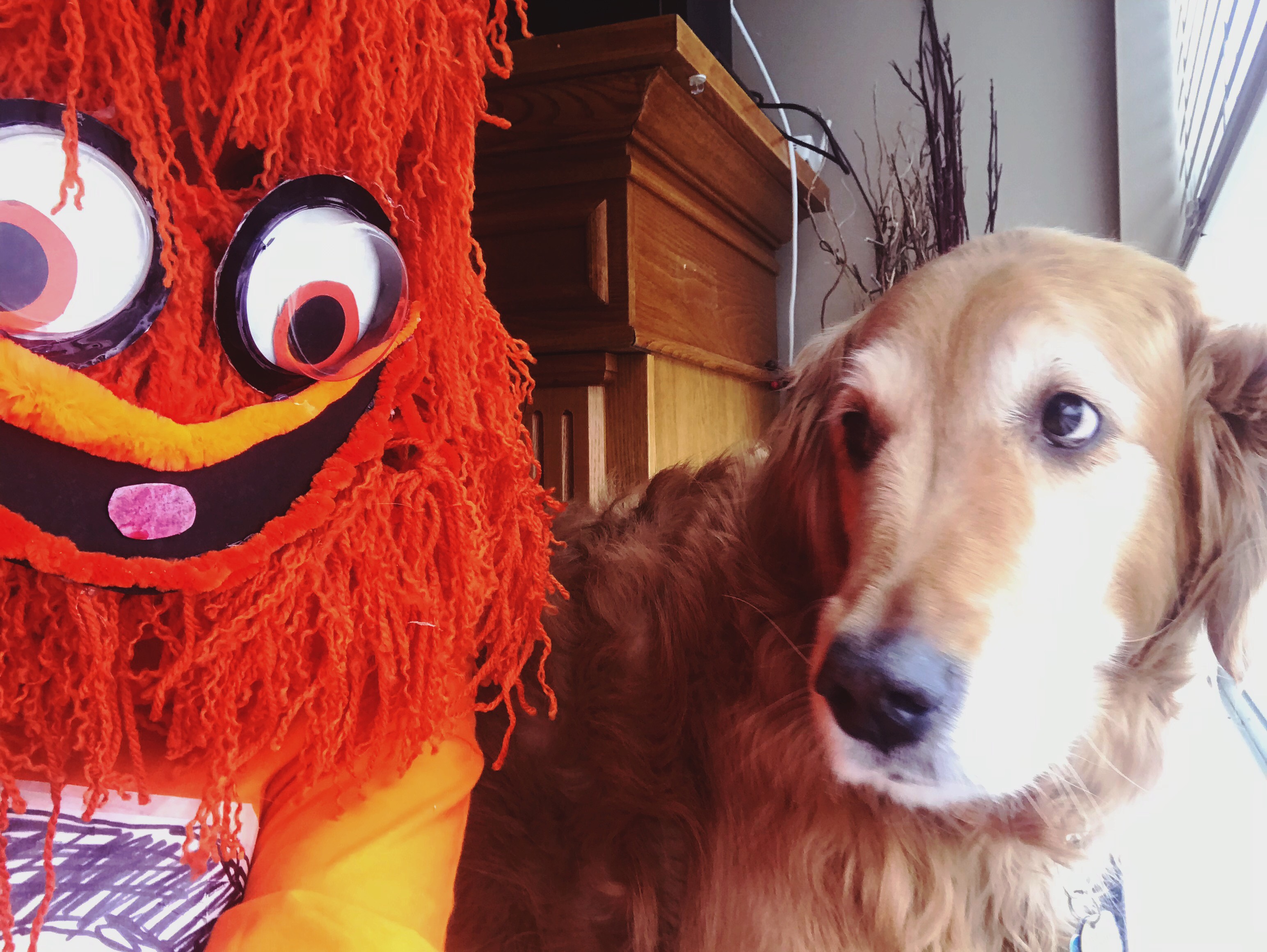 2 thoughts on “I Built a Gritty Costume for Twenty Bucks”